The Kingdom of Cambodia, formerly known as Kampuchea, is a country in South East Asia with an estimated population of over 14 million people. The kingdom's capital and largest city is Phnom Penh.

A citizen of Cambodia is known as "Cambodian" or "Khmer," though the latter only refers to ethnic Khmers. The official language in Cambodia is Khmer (95%); other spoken languages are French and English.

Agriculture has long been the most important sector of the Cambodian economy, with around 59% of the population relying on agriculture for their livelihood (with rice as the main production). Now, garments, tourism, and construction are also important.

Cambodia has a tropical climate, which means the month May to November are rainy or monsoon season, in December till April it is dry season. There is little seasonal temperature variation.

Cambodia's HIV/Aids epidemic is already the most serious in Asia. Despite the reduction prevalence, it is estimated that over 70.000 Cambodians are now living with HIV (2007 est.). This number is an estimate of the registered, however expected is that over 160.000 people are actually infected. The estimate of 70.000 is only adults(age 15 and older), 20.000 of these infected are women, an additional 4500 children are infected by HIV (2007 est.). Fortunately, it has been proven during the last couple of years that education (incl. pre-ed) contributes to avoidance of worst outcomes for Aids affected children.

Cambodia faces the challenges of HIV and AIDS besides being one of the poorest and least developed countries in Asia. Despite consistently strong economic growth over recent years, it is estimated that 35% of Cambodians live below the poverty line. A recent history of conflict is reflected in a young population, with 50% of Cambodians aged under 20.

Broader access to antiretroviral therapy(ART) is significantly improving the health and survival of people living with HIV, but at the same time agencies involved in the response to HIV need to recognize and address their more complex needs beyond health in terms of livelihoods, food, security, social integration and education. For children orphaned or made vulnerable by HIV/Aids there are particular challenges in providing holistic support and protection. 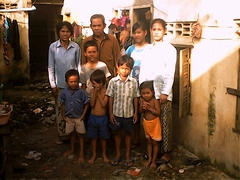 For the poorest of poor families, the constant struggle to achieve food security means it is virtually impossible for them to direct income at paying school-fees, a necessary requirement for getting attention at school in Cambodia. Where parents are able to do so, statistics show they prioritise the education of boys over girls, with school enrolments of girls being 50% lower than boys at age 15 and three times lower at age 18. The lack of access to education, and high dropout rate amongst girls, means many girls and young women are not exposed to education on reproductive health and sexually transmitted diseases.

It happens very often that the father first falls ill and dies of Aids. Very often the illness and subsequent death is not known to be related to Aids and the mother will only find out that she has been infected if she becomes pregnant and the baby then dies. Sometime after, she too will become ill and die, leaving the remaining children as orphans. A growing number of destitute widowed mothers and their children are drifting to Phnom Penh from the country to live on the streets, having sold everything in an effort to find cure for the fathers who have already died of Aids.

Cambodian cultural and religious beliefs continue to play a critical role in perpetuating gender discrimination and the subordination of women and girls. Despite women representing the majority of the population the illiteracy rate amongst females is 36%, in contrast to 16% amongst males. One third of woman-headed households lack independent economic means and in the case of married women, fear of abandonment and/or of domestic violence, often leads to increased dependency and further promotes an exploitative situation. 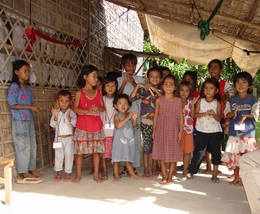 Cambodian children who lose one or more parents to the epidemic will face severe poverty and malnutrition and will become vulnerable to exploitation as child prostitutes and labourers. Reports are saying that the most vulnerable group of Aids orphans is those aged seven to twelve. This age group is considered to no longer attract the protection given, by the government, to babies and infants, to be old enough to work, but to lack the life skills and the physical strength to protect them.

For young girls in this situation there is a great danger of being sold to brothels if orphanages do not take them in before their mothers with HIV/Aids become too ill to protect them. The Government has little money to support orphanages and many children prefer to live on the streets rather than in Government orphanages as the conditions there are very grim.

In addition to orphans in households almost 9000 children are living in orphanages (May 2006 est.). Of the children living in Cambodia’s orphanages, 40% are orphans, 11% have been abandoned and a further 43% have been relinquished to institutional care due to poverty.