The Jeannine and Billy's Children's Foundation has been officially registered and recognised by the Ministry of Interior on June 14, 2007 confirm the NGO law in Cambodia. Jeannine and Billy's Children's Foundation is in the process to sign a Memorandum of Understanding with the Ministry of Social Affairs, Labour, Vocational training and Youth Rehabilitation. 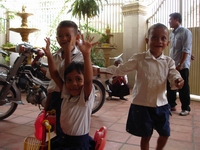 JBCF is there to promote the integration of children, whose parents died of AIDS and, AIDS affected children and families into Cambodian society by providing them appropriate care and education through financial support and in a participatory way to try to improve the quality of life of these children and families. Thereby, creating a loving and caring environment for these children. To in the end contribute to the prevention of child trafficking, drugs abuse and sexual child abuse.

The main objectives of the project are as follows;

Jeannine and Billy's Children's Foundation realised that education is a practical answer to battle poverty. Therefore the following Vision and Mission have been established;

Vision: JBCF vision is of society where people live and work together in peace and equality to improve their physical, psychological, emotional and social quality of life and to guarantee a hopeful and sustainable future for all orphans and vulnerable children.

Mission: The mission of the JBCF is to provide integrated services that address the complete needs of orphans and vulnerable children in Cambodia, affected by HIV/AIDS, from the earliest stages of their lives to the point at which they can thrive independently.

The Board of Directors in conjunction with the founding beneficiaries has appointed an Executive Director, Mr. Billy Barnaart, to take up the responsibility to develop the organisation and expand the services for the beneficiaries.

The board of directors consists of;

Mr. Govert van den Wittenboer, Consultant
Govert van den Wittenboer grew up in various countries, his favourite was Australia. After finishing University in the Netherlands, with a degree in Marketing and Communication, he joined the workforce. After a period of 6 years he thought he was ready for a new challenge. He sold his house packed his bags and moved to Cambodia via Vietnam. Govert met Billy while participating in one of his most favourable leisure activities: football and immediately felt the urge to help this man as best he could. When Billy asked Govert to assist in the setting up of a new organisation there was no hesitation. Govert: "Together with the other members of the organisation we have managed in a short period of time to create a fine NGO." Currently Govert is a freelance consultant with a main focus on capacity building of local staff. Other leisure activities are travelling and enjoying great foods and wines.

Ms. Nou Sam An, Education Coordinator
Nou Sam An studied Business Administration at the Pannastra University in Cambodia. At this moment, she works for LICADHO (Cambodian League for the Promotion and Defence of Human Rights) as a Senior Childhood Educator. Her family thought education was very important and she hopes to pass this value on through her job and through JBCF. Even after the war, when money was tight, her family found it very important to send her to school. She enjoys travelling and hopes to visit Vietnam in the near future.

Mr. Conor Boyle - Global Training Manager- ILO Better Work
Until last year Conor was a long time resident of Cambodia. Originally from Ireland and then Canada, he works with the United Nations agency International Labour Organization (ILO). At present he is the training and capacity building manager for the global Better Work program. The program involves the development of global tools and country level programs; and builds cooperation between government, businesses, workers and international buyers in the apparel industry to improve labour standards and competitiveness. This helps some of the worlds poorest people to improve their lives and their livelihoods.
Connor: I known Billy and his family for nearly 15 years. And while Billy may be a bit slower on the football pitch than he used to be his commitment and effort to help some of Cambodias most vulnerable people is as strong as ever. Billys work has a direct and positive impact on the Cambodians he works with. It is for these reasons why I am happy to contribute time to this extremely important initiative. It is a development program that works and with enough funding can find ways to be sustainable in the long run.

Mr. Oddur Malmberg, Social Worker
Oddur Malmberg (1962) is born and raised in Iceland, where he currently lives. He is in a relationship and a father of four children. Oddur studied Theology, Greek and Sociology at the University of Iceland.
He worked in Cambodia for LICHADO (Cambodian League for the promotion and Defence of Human Rights) as a prison project consultant, when he came in contact with Billy. Oddur enjoys playing football in his free time and ended up playing in the team, Bayern Wanderers, coached and trained by Billy. Why Oddur Malmberg became part of JBCF; "I admire and value his (Billy's) ideas and his respect for all human beings and what he has been doing. To witness the good work that JBCF and Billy have been doing for orphans and vulnerable children affected by HIV/Aids in Cambodia is a privilege and makes me proud to be part of that work."

The Jeannine and Billy's Children's Foundation will work in collaboration with HPHAO and other service providers in the Phnom Penh area as here the need is very high and the risks for the orphans and Aids affected children to be a victim of trafficking or slavery is more present.

Maybe in the future more target areas will be selected as commune leaders already have approached JBCF to take care for a number of orphans who were not being taken care for. Collaboration with Khemara, Caritas Cambodia, COERR, COSECAM, Maryknoll, Sisters of Charity of Mother Theresa, Don Bosco Foundation, Social Services Cambodia and others will be established in the project area. More information about these partners can be found here.

Billy is tanner than the locals and they pick on him and love him. This is what I like most about this man. He has built up a repoire with the locals, unlike most internatioals here. He's unassuming and contemplative, or just quiet, I haven't figured him out yet. He's balding but a black cowboy hat hides the top of his head. Long, black curls protrude from the rim, whipping me in the face as he drives wildly on dirt roads outside of Phnom Penh. I've gone with him twice now out into the slums or to relocation sites outside of the city.

As Phnom Penh becomes gentrified, the ghetto is sometimes burned out by the government and people are forced to leave, planted capriciously in unwanted areas. He works with people affected by HIV/AIDS to build schools, jobs and centers for orphanages and vulnerable children. The man is an enigma, but I'm intrigued. I'm intrigued to work with a grass-roots non-profit, excited for the opportunity to work for people, immediately and directly.

I met two of the families I will work with in my first project here. They are part of a home-based care program that Billy started through the Jeannine and Billy's Children Foundation many years ago. There are six families in the Bora Khela slum. Vena is an 18-year old whose family was helped by JBCF and who is now attending university on a four-year scholarship from an Australian NGO. She will be working with me during the home visits and also be serving as a translator. The first family we went to visit is headed by a grandmother raising four grandchildren orphaned when their parents died of AIDS. Billy provided the family with $150 start-up and now the family is much less vulnerable, running a small gocery stand out of their home. He has put a children's center nearby and hired a teacher who he had found close to death, soon after her husband had died of AIDS. Now she is healthy and her daughter has pink toenails to match her mom.

We took the moto into a different area, down alleys between tin houses, an alley so small that my knees nearly scrapped along. We went to Lekhana's house, another grandmother raising her child's children. She tells Billy that she's not having trouble with her oldest now and points to her yellow and black sarong. He gives her clothes and some money everyday. Everyone is laughing and talking in Khmer, we're sitting on tables and stools near the kitchen, which is dark and covered in flies. The floor is hard-packed mud and swept clean. Billy tells me that one of the children in the family was close to death several years ago. When Billy got her started on ARVs, she began to get stronger and he told her that if she got stronger and stronger still, he would take her somewhere. She wanted to go to the beach. They are laughing about the trip. Billy wanted to go up some hill and Vena couldn't go because of her handicap, unless Billy carried her. They are all picking on the way Billy walked up the hill.

To get a better sense of Billy's projects, he wanted to show me some other work that HPHAO (Hope for People Living with HIV/AIDS organization) is doing in villages outside of Phnom Penh. I borrowed a helmet from Wendy, the owner of our local bar, and held on tight as Billy took off into the dust. He knows the shortcuts, he navigates and I'm encouraged. So much money gets poured into the throngs of international NGOs in Phnom Penh and often only the internationals reap the benefits, traversing the streets in cushy landrovers. And I imagine that many of these people move from one air-conditioned office to the next and never see what they're proclaiming to help.

I went to a 5-roomed school and the English teacher showed me around, introduced me into classrooms and told me about their days. I threw the little kids into the air and they all grabbed my arms and rubbed at my skin. The older kids practiced their English with me. One girl looked western and the teacher told me her mother sells fried bananas and sweet potatoes in Phnom Penh and her father is a German that shes never met. Most of the kids are barefoot. The youngest kids dont wear pants. But they get breakfast, lunch and a snack, ad thats more than some kids I've seen. Fifty percent of children in Cambodia have stunted growth, which also affects their IQ level.

We visited a second school after lunch where about 20 kids from the village have classes. This is where I saw the hungriest child I've ever seen. And I wondered why he wasn't in the free school. Just after passing the child in the street we passed a half million dollar German orphanage with no children. The resort orphanage is looming, empty and haunting. Why is that man rubbing his belly in Germany feeling satisfied that he built an orphanage, not knowing the place, the country and not realizing that no one is benefiting from his ostentatious orphanage?